Do Law Firms Operate on Principles of Capitalism or Totalitarianism?

I was having a beer at Right Brain Brewery last night with a friend who graduated from law school and then went to work for a large corporation.  We talked a little politics, both local and national, and about large corporations-both law firms and other companies.  Chris noted that his biggest disappointment as he rode up through the corporate ranks was his realization that most of the people at the top were idiots.  What kind of incentive system have we put in place when the most conniving, connected, egomaniacal and self-absorbed people often are the ones who run the show.

Continue reading "Do Law Firms Operate on Principles of Capitalism or Totalitarianism?" »

Posted at 10:41 in 'The Greatest' Philosophy, Lawyer Bashing | Permalink | Comments (4)

We received such interesting feedback on our post last week about wierd law firm names that we have decided to launch a poll.  Which law firm name do you think is the worst law firm name of the bunch?  Please note that you can click on the law firm names found at the previous post in order to see what their website looks like.

I Have No Time To Blog: This Old Excuse No Longer Applies…

People always ask me how I find time to generate content across 11 blogs.  I have some help.  One of my team members is there to receive my dictation (such as I am doing right) and enter it as a blog post.  The advantages of dictating your blog posts are many:

What’s that you say?  You don’t have a staff member who can actually receive the dictation and type it into your blog?  We launched a company called www.ublogwetype.com

to solve that very problem.  While we have lots of staff here who can receive dictation and post our latest blogging effort, we understand that some people do not have that advantage.   For $10.00 a month, ublogwetype will receive your dictation and transcribe your blog posts for you.

So let’s stop all the excuses, shall we?  Get blogging, get dictating and stop reciting that now stale excuse that “I have no time to blog.”

Change Is Good For Lawyers, Law Firms and the Country

For those of you who have been following the Greatest American Lawyer blog for some time, you know that “changing the way law is practiced” has been the byline for this effort since day one.  I always tell clients that I doubt I could get up in the morning to simply practice law.  But I jump out of bed at the thought of changing the way law is practiced.

So what do I think about the fact that both republicans and democrats have attempted to leverage the “change” theme in order to win the November 4 election?  Let’s just say I get all tingly inside.

There is something in the air isn’t there?  We see the world changing in dramatic ways politically, economically, socially and virtually every other way.  Technology and the Internet have something to do with the changes we see all around us.

Continue reading "Change Is Good For Lawyers, Law Firms and the Country" »

Why Wouldn’t You Send Clients Their Bill by Email?

We have clients who are individuals, small businesses and megacorporations.  All of those clients receive an email bill which includes the amount owed and the option to pay by credit card or wire transfer.  For those who choose to pay by credit card, it immediately takes them to our merchant account for processing.  Because most of our work is billed on an up-front flat fee basis, this means we can talk to a prospect and have them signed up and paid within hours.

But don’t listen to us.  Even large players such as the 310-attorney firm Loeb & Loeb have gone to e-billing.  In this step by step article, Loeb & Loeb Embraces E-Billing, you can learn everything you need to do in order to implement an e-billing system.  If you manage to also bill on a flat fee basis, you won’t ever have to send a past due or collection letter again.

Law firm names have always driven me crazy.  I’ve worked for firms where people fought to get their name on the letterhead.  I always thought the traditional naming convention of placing the partners’ last names in a long string of words was pretty idiotic.  Why would a company full of massive egos create the potential for yet another ego fight?

I have never used my last name as a law firm name.  Here are ten law firm names which will certainly make you scratch your head:

Lawyer Gets Blown Up At His Law Office under Suspicious Circumstances

It will be interesting to see if the “person of interest” was one of the attorney’s clients.

ATLANTA -- One person was killed in an explosion at a Dalton law office Friday morning, authorities said Friday afternoon.

The victim has not been identified. More details are expected to be released at a 4:30 p.m. press conference.

The blast at at McCamy, Phillips, Tuggle & Fordham was caused by some type of explosive device, according to Dalton police Lt. Bruce Frazier. Frazier said there's a person of interest in the case but no one has been arrested. Published reports said earlier Friday that a man named Lloyd Cantrell had been questioned.

The explosion happened at around 10 a.m. Friday. A Dalton police spokesperson said there was some sort of altercation at the law office just before the blast.

The eight-lawyer firm, founded in 1932, works out of a two-story, colonial-style house. Police cordoned off the block and shut down a post office near the law firm, which specializes in personal injury and wrongful death cases, according to its Web site.

At least four people were hurt, authorities said, including an attorney, James Phillips, who investigators said suffered severe hand injuries and was severely burned. He was airlifted to the Still Burn Center in Augusta. The other three victims were in stable condition at Hamilton Medical Center, spokeswoman Emily Michael said.

City Park Elementary School was locked down, though it wasn't damaged. Children were taken to a nearby church.

Court proceedings were suspended at the Whitfield County Courthouse.

The Cost Savings in Going Digital

I’m often asked how much money it will cost in staff and time to scan in all of the documents which are generated from outside our own office onto our file server.  Essentially, people want to know whether or not a paperless law office will save, or cost, them money.

There’s no doubt that it takes people and time to scan in documents.  While I have not run an analysis comparing the cost of a paperless versus a non-paperless operation, I do have some observations.

Webinar Today! "Staying Out of Trouble: A Media Law Primer for Bloggers" with Professor Gary Williams of Loyala

With the increasing presence of bloggers' contribution to mainstream media, it's easy to think that there's no danger in jumping right in. But recent cases of libel and slander against citizen bloggers indicate otherwise; as the Societ of Professional Journalism indicates, "The same longstanding laws concerning libel, slander and access to people and information apply to 21st-century news-gatherers." Join us as Loyola Professor Gary Williams walks us through what to expect in terms of Freedom of Speech as it applies to online content.

Standing at a Podium as a Lawyer in Front of 100,000 People and Yelling My Marketing Message 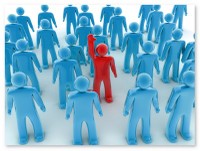 Any lawyer would like to have an audience of 100,000 people per year who will listen to and see your marketing message.  The local phone book certainly doesn’t provide this opportunity.  The internet does.

Over 100,000 unit visitors will have visited our law firm’s various web pages and blogs in 2008.  Over 15,000 people in 2008 qualify as “returning visitors” who regularly come back to our website and blogs for further information.

Now you tell me that the internet has not fundamentally changed the practice of law.  Of course, most law firms don’t do anywhere near this level of traffic and have very few loyal website visitors.  That’s because most lawyers don’t share their expertise online.  Most lawyers don’t broadcast to the world that they are very good about the niche practice areas in which they specialize.

Continue reading "Standing at a Podium as a Lawyer in Front of 100,000 People and Yelling My Marketing Message" »