I am proud to be a faculty member for an upcoming 75-minute presentation offered through CCM (Center for Competitive Management).  The course title is Revenue Purple Lawyer:  Increase Profitability Not Billable Hours.  The course is being offered with a money-back guarantee and early bird pricing from $265.00 to $345.00.  My fellow faculty includes Arthur G. Greene, Consultant, Law Practice Management.  The Course will provide very specific information on the following topics:

CLE (Continuing Legal Education) credits are available for those attending.  Of course, I will be discussing various aspects of law firm profitability including using technology to increase productivity and reduce overall costs, value-billing strategies to increase attorney revenue per client.  Of course, no profitability strategy will be complete without also discussing improved customer service models for law firms and the building of long-term client relationships.  I invite everyone to sign up for this course.

I’m standing in front of a group of about 25 people doing a presentation on digital dictation.  For those of you who follow the blog, you know that digital dictation is one of my favorite productivity tools.  Here is the link to the resources that we’ve made available to the attendees today, which I am now making available to you, as well.

Since getting our new Appriver.com Spam Service in place, the number of emails which hit my inbox on my Lenovo ThinkPad X61 Tablet PC has been reduced by probably something in the range of 85%.   I recently posted about our new spam filtering service in an article titled “The Measure of a Man Is the Size of His Junk Email Folder”.

After one week of being virtually immune from spam, I have several surprising observations to make.  Because I receive email on my laptop and blackberry, reducing the amount of new email hitting my inbox has caused a drastic decrease in generalized anxiety.  This is probably for several reasons where the first is that when email is hitting your inbox, you’re always wondering if one of them might be important.  When email is constantly hitting the inbox, whether it’s spam or not, you are left to wonder whether or not something important is happening.  Reducing the amount of email hitting your inbox reduces the overall level of anxiety.  There’s a big difference between having ninety new emails and having five.  I can quickly see that almost nothing is going on and get back to my normal life, other business activity or simply having fun.

Previously, the amount of spam hitting my inbox made me feel like I was constantly under attack.  I have written previously about the effects of technology everyday business and personal life.  While technology allows you to work 24 x 7, there are some great positive effects of constantly being able to see what’s going on.  99% of the time, you are checking email just to make sure everything is okay.  Most of the time, everything is okay.  Not having to wonder whether or not something important has happened without your attention is a very powerful benefit which technology, and specifically Blackberrys and other email receiving cell phones create.

Eliminating spam also removes that anxiety that somewhere in your inbox is an email that you’ve missed because of the shear volume of junk.  While I use Copernic Desktop Search to quickly analyze my email content, It is really nice having a much more manageable amount of email waiting for my review when I pick up a portable or start up my laptop. 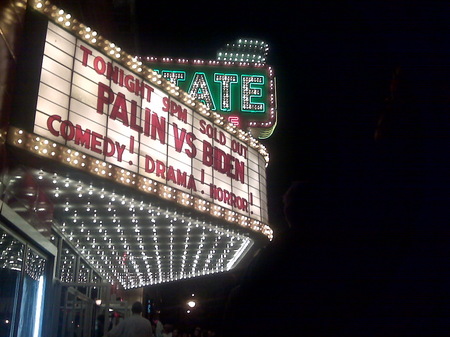 I attended the coolest, most entertaining VP debate party last night with 500 other people at Traverse City's amazing State Theater. Note the sub-title of the big event!  For those inside watching the debate, it was all of the above, Comedy, Drama and Horror all wrapped up in a fun filled evening with Michael Moore.

Before I describe the event, I must confess that I really don't do politics. Historically, I have voted Republican, Democrat and Abstention (no vote at all) in equal parts.  I have this crazy theory that politics (which always seems shallow and often ridiculous to me)  will be subsumed by global economics.  National politics may not become obsolete. But I expect that it will continue to become subsumed by global economic ties between nations and the reality that we are all in this together (and by 'we' I mean human beings).  Our economic ties to China, for instance, preclude preclude us from being adversarial with what would otherwise be a mortal enemy.

I am a great believer in the human intellect. I believe in smart people making smart decisions based on information, not ideology, whether they are practicing law, running a company or running our country. I understand that this is not the way the world has historically worked. But I have great confidence that the availability of information on the internet offers the possibility that we will not need to fall back on ideology as a short-hand, quick device to take positions on complex issues. Yes, Americans might even research the issues and make informed decisions in the internet age.

Needless to say, I am voting Obama - Biden this year.  McCain and Palin have shown me nothing to suggest they are capable of higher thinking, and neither has any academic credentials which indicate that they are remotely intelligent people.  The inside scoop in Washington is that you have to really 'dumb it down' when explaining things to McCain because he is not very smart (sound like someone else we know?). Sarah Palin is a great mom. But she is clearly not a smart person, and has shown a capacity to regurgitate non-responsive ideology to virtually any possible question.  People who do not have the capacity for critical or complex thought have no choice but to fall back on ideology which can, on its best day, simply offer boilerplate non-answers to complex questions.

So to watch the debate at the State Theater with Michael Moore and 500 other people, 400 of them who will be voting Obama - Biden, was a lot like watching your College football team beat up on the opposition at your school's Homecoming game. The crowd roared virtually every time Palin rambled, forgetting for the moment that no one without understanding of complex policy issues should become the leader of the free world - the most powerful decision maker on earth.

You know you’ve been around the Internet for a long time - - a real player - - when the amount of spam you receive in a day eclipses the total of legitimate emails you receive in a week.  Let’s face it.  You can create all the Gmail accounts you want, but you still need to forward email to a single inbox for review.  As of 30 days ago, I was receiving approximately 100 to 150 spam emails a day.  Microsoft Outlook does a pretty crummy job separating legitimate email from spam.  We decided to go with a spam filtering service and ultimately decided Appriver.com would provide us spam service.