We would never have considered a billboard and, until recently, have not done much advertising locally. We put all our resources into the web, the most cost-effective advertising around.  80% or more of our business is outside the state. 50% of those clients are outside the country.  We have little interaction with the local bar [in court], which can be petty and inbred [a small vocal element given 'birth' by one particular firm].   There is this one firm that has been a perpetual annoyance through the years [(the above billboard does not deal with my old law firm BTW - Tim Smith asked me to clarify this back in April)].  Having figured that maybe ignoring them wasn't working very well, we settled on this billboard which is right across from their office building [the most harmless of all the alternatives except continuing to do nothing].  They get to look at it every day. I get to smile thinking about them looking at it and knowing that, even after it comes down someday, "it can always go back up." [I won't go into details on what motivated the billboard. It went beyond putting a billboard up across the street from someone's office for 30 days]. 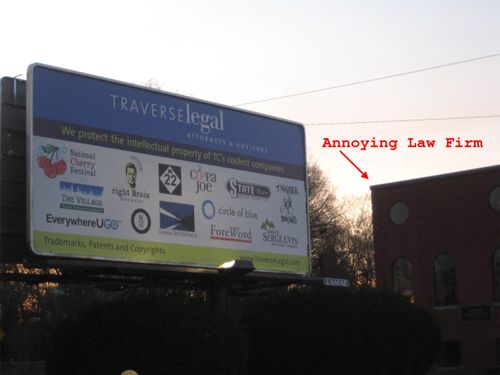 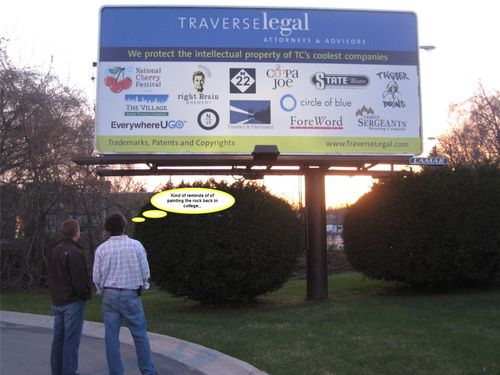 Note 07-11-09:  There was an email sent around (below) by a member of the local bar to all bar members falsely stating that I disparaged the Association itself and that my remarks concerned all members of the local bar.  Please read the post above carefully.  Once you get by Tim's sensational headlines and exaggerations, you may even find yourself agreeing that our local bar struggles in certain circles. Regardless, I did not ever mention or reference the Association and I never said or suggested that they offenders were "many" let alone "all."  Nor have I named any law firms who, until Tim's email, were anonymous by name and continue to be on this blog.  This blogs readership, again until today, is overwhelmingly not local.   Of the over 1,500 or so blog posts over 4 years of blogging, most of that time anonymously and still semi-anonymously, about ten posts deal directly with local issues, an many of those were when I was unsuccessfully sued twice by Tim and his partners.

The nonsense that has gone on with some local attorneys in my town is historic, dating back to old grudge's, firm break-ups and the like.  Many younger attorneys at what should be the leaders in our local community of lawyers end up suffering the legacy.  The overwhelming majority of the lawyers in the local bar have little to do with the historic rivalries and simply watch from the sidelines.  I was right in the thick of old hatreds, screw jobs and supposed emotional wounds at my old firm none of which had nothing to do with me except where I worked.  It was unproductive for clients and, as importantly, infected the local bar who could not count on some of the most important local firms to help lead the local bar association in everyday practice of professional courtesy.

So, to my fellow local attorneys and the bar association members who may read this post.  I do believe that there are a small number of local attorneys who are petty and inbred from one particular firm, but you have already probably guessed that, in all likelihood, I am not referring to you. And if you happen to have worked for the 'birthing firm' once about a time and you are not located at the building above, then you also know we made our peace long ago.

I would also ask you to consider the source of the email below and ask yourself these questions: (1) Why did Tim Smith really send this email? (2)  Why did Tim Smith distort and lie about what this post said and his totally contrived story about how he "discovered this post"? (3)  How did Tim Smith get access to the assocation email list to send further his personal agenda, grudges (I supposed he killed two birds with one stone since he nailed me and the previously mostly anonymous firm in the picture above with one shot)?  (4)  How did Tim Smith end up speaking for the bar association?  I don't even remember him attending any more than a dinner or so in the last 10 years.

Ha! You'll soon have to make room on that billboard for RecycleChicken. Looks great!

Now is that what the Greatest American Lawyer would do?

I like it. The best way to deal with the anti-competitive is to compete!

Hi-larious. Like the billboard too, aside from it's, um, fringe benefits.

Chuck: Definitely not. But sometimes you just gotta turn lemons into lemonade. All in good fun. We are going to use this format for the next year of local advertising across various media players. Our clients who aren't in the ad want to know how they can be included.

Thanks Chuck. See you around the blogosphere.

Absolutely Hilarious... even better if they were looking at ur smiling face too

I have only recently learned of this website. I am extremely disappointed in the manner you are addressing your issues with that law firm. This is not, in any way, "hilarious" as some have commented. It is sad and unprofessional.

Mike: Thanks you for your thoughts and comments. I am wondering if you can elaborate. How would you have addressed the issues with 'that firm?" When dealing with a firm like this, what options would you consider?

PROLOGUE: My old firm used the local bar email list to send this announcement around to the local bar. Tim Smith is one of the partners from my old firm, which unsuccessfully sued me twice after departure. They take great issue with this blog for some reason which, until today, was read almost exclusively outside of Traverse City.

While you are on the Greatest American Lawyer blog, check out some of the practice tips on technology implementation and alternative billing models. Here's the email .... As always, I would be interested in your thouhgts.

So, I get a phone call this am from a non-lawyer friend here in town. He asks me, “so what’s up with you and all the other attorneys in town being petty and inbred”? [GAL Comment: All attorneys? Hmm. Luckily the local bar knows exactly which elements are inbred and petty]. I had no clue what he was talking about. [GAL Note: Tim called me right after the post went up in April to complain that people might think it was Smith & Johnson I was referring to. I wonder why he would say he had "no clue"?]

He said he’d been on-line running a search on “traverse city billboard advertising” and buried about 4 pages deep in his google search was an article written by a member of the local bar association – Enrico. Here’s the article - http://greatestamericanlawyer.typepad.com/greatest_american_lawyer/2009/04/the-billboard-who-says-billboard-advertising-isnt-effective.html.

While I had my buddy on the phone, I looked up what he was talking about and read the above article. It looks like Enrico had some kind of “dust-up” with B and H [deleted the name of the firm - no need to broadcast it outside Tim's broadcast to the local bar] and was upset about it and wrote in his article that we all were “petty and inbred”…….. [GAL comment: Hmm. Did I really say the entire bar was ..] "some My hat’s off to Mike S who wrote a comment to the article referring to Enrico’s description of the local bar as “sad and unprofessional”.

Now, at this point, you might be asking yourself, “Why did Tim send every attorney and judge in the GTLABA this”? [GAL note: Luckily, there is probably no one in the local bar who doubts Tim's motive to use his access to the bar email list to send this email :-). Duh...]

1. You might get a call from a friend or family member [as I did] asking you why you are both petty and inbred…. Now you know a little about what the hell they are talking about [GAL note: Sorry Tim, they already know what I am talking about].
2. I’m starting a GT___A Committee on Petty and Inbred attorneys. We’ll meet on the first Monday of the month here at my office to discuss all things petty and inbred. Let me know if you’re in.

[GAL note: Do you think Tim understands that by sending this email, he just proved my point?]